iOS 7 Tips and Tricks for your iPhone and iPad 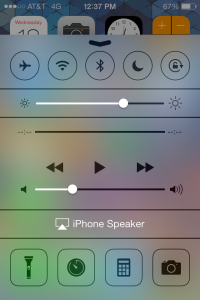 Along with the recent launch of two new iPhones, Apple has also released the new iOS 7. The latest update to its mobile operating system runs the infamous smartphone, as well as the iPad and the iPod touch. Whether you updated your Apple iOS this week or you’re planning to upgrade your phone or iPad this weekend, here are some tips and tricks to help you navigate Apple’s newest iOS:

Swiping up from the bottom to the top of the touchscreen brings up one of iOS 7’s biggest features. Along the top of the screen are five settings options: Airplane Mode, Bluettoth, WiFi, Do Not Disturb and Orientation Lock. Users can flip between turning these features on and off with a quick tap on the chosen icon.

In the middle of the screen users can find the controls for the iPhone’s brightness and music.

The bottom of the screen houses four native apps: the new flashlight app, calculator, clock and camera. These apps are also accessible while the phone is locked.

To close down apps in old iOS platforms users would double tap the home button and select the app they wanted to close. In iOS 7 users double tap and apps appear in a series of screens users screen from left to right. To close apps, users swipe up.

Instead of scrolling to the left to search for iPhone content, it’s now accessible by swiping down anywhere on the screen.

Folders used to have a capacity limit on the number of apps users were allowed to store. Apple now allows users to hold as many apps as they choose in a designated folder.

The camera now offers more user options including High Dynamic Range and Panorama. To appease Instagram fans there’s a new Square option and native filters. Photos are also organized differently. The standard albums are still available, but by tapping the Photos icon in the bottom left, users can view images as organized into “collections” sorted by date.

If a user wants to block phone calls or messages from a number they don’t want, they now have the option to do so via the contacts or numbers found in the Recents menu. Users click the info on the right and scroll down to the Block option. The new feature will block any phone calls, messages or FaceTime chats from the selected contact.

One of the most notable differences can be seen in the mobile browser Safari, which underwent a major upgrade with a new design and Shared Links fed through Twitter all available through the Bookmarks tab. The Music app now features iTunes Radio, showcasing a variety of free radio stations for users to choose from. The direct iTunes link means that users can buy music from directly from the station. Third party apps like Facebook have also undergone a change. Notifications, Friend Requests and other option are now located at the bottom of the screen and the app now features a cleaner interface design to more closely resemble iOS 7.

Users now have the option of having their apps automatically updated instead of having to push them through manually. The App store will provide users with a list of apps that have been recently updated.

Have you found any  iOS 7 updates and shortcuts that we haven’t listed in this article? We’d love to hear them. Tell us your favorite updates or tips and tricks in the comments section below. For more information about DIY iPhone and iPad repair visit us on Youtube.