How to Replace an HTC One M8 Battery

If your HTC One M8 battery isn’t holding a charge like it used to and you find yourself reminiscing about the good old days when you didn’t have to bring your charger with you everywhere you went, don’t fret! You don’t have to get a whole new phone! Follow these relatively simple steps to perform a full DIY battery replacement that will give both you and your smartphone a whole new lease on (battery) life.

Before you start the teardown process, it’s important that you make sure that your phone is completely powered off. There are two front grills on either side of the smartphone’s display that are secured in place with a small amount of adhesive. To remove these grills, start by using a heat gun or blow dryer to soften the adhesive.

Once you’ve softened the adhesive, insert the sharp edge of the precision knife in the gap between the display assembly and the top grill.

Working around the top edge of the phone, use the precision knife to carefully lift the grill from its adhesive. Using the thinnest side of the blade will cause as little damage as possible. If you end up damaging the grills beyond salvation, we sell replacements! Use the same process to remove the bottom grill.

Find and remove the two small #00 Phillips screws and four T5 torx screws that secure the display assembly to the body of the smartphone. 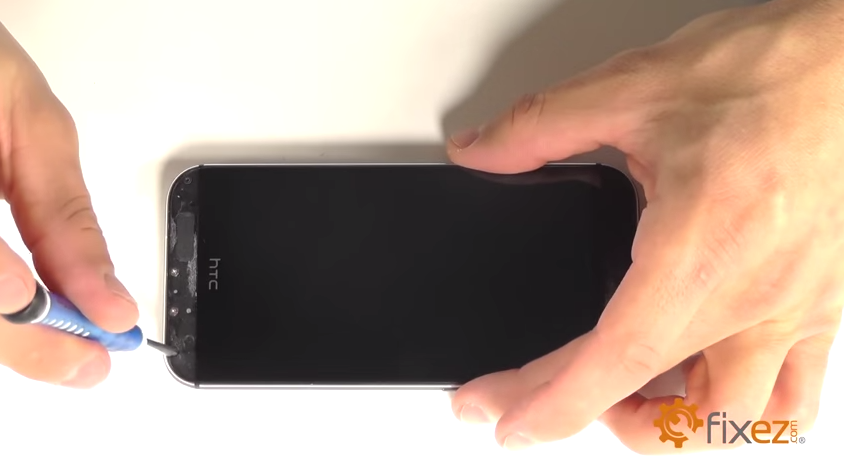 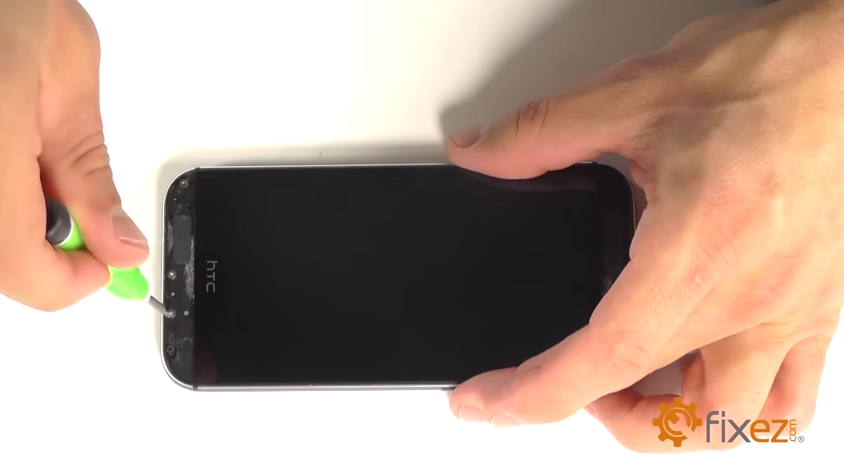 If you haven’t already done so, now is a great time to remove both the SIM card and micro SD card trays from either side of the HTC One.

Insert your precision knife between the rear cover and the M8’s display assembly to free the first of many clips that secure the LCD and touch screen assembly in place. Keep working your way around the phone until you’ve freed all of the clips.

Once there is separation between the rear cover and display assembly, use your hands or the triangle plastic opening tool to work around the perimeter of the smartphone until the rear cover is completely removed.

You’ll find that there are two pieces of protective tape covering the top of the motherboard. Use the heat gun to help soften the tape, then peel it up.

Next, locate and remove the two coaxial cable connections that are also secured to the motherboard.

Locate and remove the two small #00 Phillips screws that secure the connection for the battery terminal. After you’ve removed the screws, loosen the connection with your pair of fine tip curved tweezers.

Now it’s time to locate and remove the three coaxial cable connections. There are two near the rear-facing camera and the one by the loudspeaker.

Six locking sockets secure the motherboard’s ribbon cables in place. Release their locks by flipping the opposite side of the ribbon cables up 90 degrees with your tweezers. Then, gently slide the cables out of their respective sockets.

Now, locate and remove the three T5 torx screws that secure the motherboard down to the center of the M8.

You can now lift the motherboard up and out of the HTC One. Both the motherboard and the surrounding connections are quite delicate, so be careful when maneuvering it through the cables and tape so that no damage occurs.

From here, you should be able to gently lift up and remove the battery. Since it’s held down with quite a bit of adhesive, it’s a good idea to use your heat gun as needed. When everything’s good and softened, gently pry up the battery from the bottom with your plastic spudger tool. Be careful not to break or damage any of the loose connections surrounding the battery. 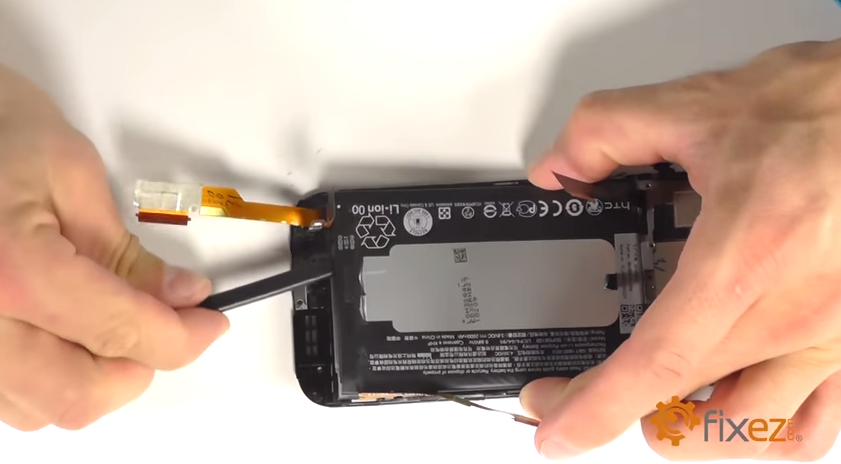 You’re halfway there! Replace the battery, and then work backwards until you’ve fully reassembled your HTC One M8. Now you can get back to talking, texting, and surfing without worrying about killing your phone’s battery life.

If you need more help, check out our HTC One M8 repair guides for complete, step-by-step disassembly instructions & HD repair videos. You can extend the life of your device (and save time and money in the process!) with the high quality cell phone & tablet replacement parts found at Fixez.com.